Top 10 Most Expensive Stadiums in the World: There has barely ever been a game played without using a stadium from the beginning of time. Stadiums have actually come to represent humanity’s passion for various kinds of activities and competitions. In this post, we’ll tell you the top 10 most expensive stadiums in the world. In addition, we’ll also tell you the amount it cost for those stadiums to be constructed.

Modern stadiums make use of the most cutting-edge technologies available. Some of them are exquisite pieces of artwork that showcase the finest in architecture, spatial design, and technological innovation.

Usually, when we talk about amazing structures, we understand that they require substantial financial investments to be built. The best stadiums in the world are those whose construction costs a sizable sum of money.

Read: Top 10 Countries With The Highest Pilot Salaries In The World

SoFi Stadium is known for being the most costly stadium in the world. Los Angeles Rams and Los Angeles Chargers, two dominant NFL clubs, play their home games in this stadium. The stadium’s construction began in 2016, costing $5.5 billion, and was finished and inaugurated in 2020.
Modern amenities and a masterpiece of architecture decorate the SoFi Stadium.

With a total construction cost of $1.9 billion, Allegiant Stadium is one of the most expensive sports stadiums in the world in 2022. The stadium is home to NFL’s Las Vegas Raiders and the University of Nevada, Las Vegas (UNLV) Rebels.

Allegiant Stadium, which opened in July of last year in Las Vegas, is one of the world’s more recent stadiums, along with the SoFi stadium.

MetLife Stadium is ranked third most expensive stadium in the world in 2022. New York Giants and New York Jets, two further NFL juggernauts, play their home games in the stadium.
The Metlife Stadium was opened in 2010 at the cost of $1.7 billion, and thanks to cutting-edge technology, it quickly rose to the top of the list of most costly stadiums in the world. New York Jets (50 percent) and New York Giants are the stadium’s co-owners (50 percent). 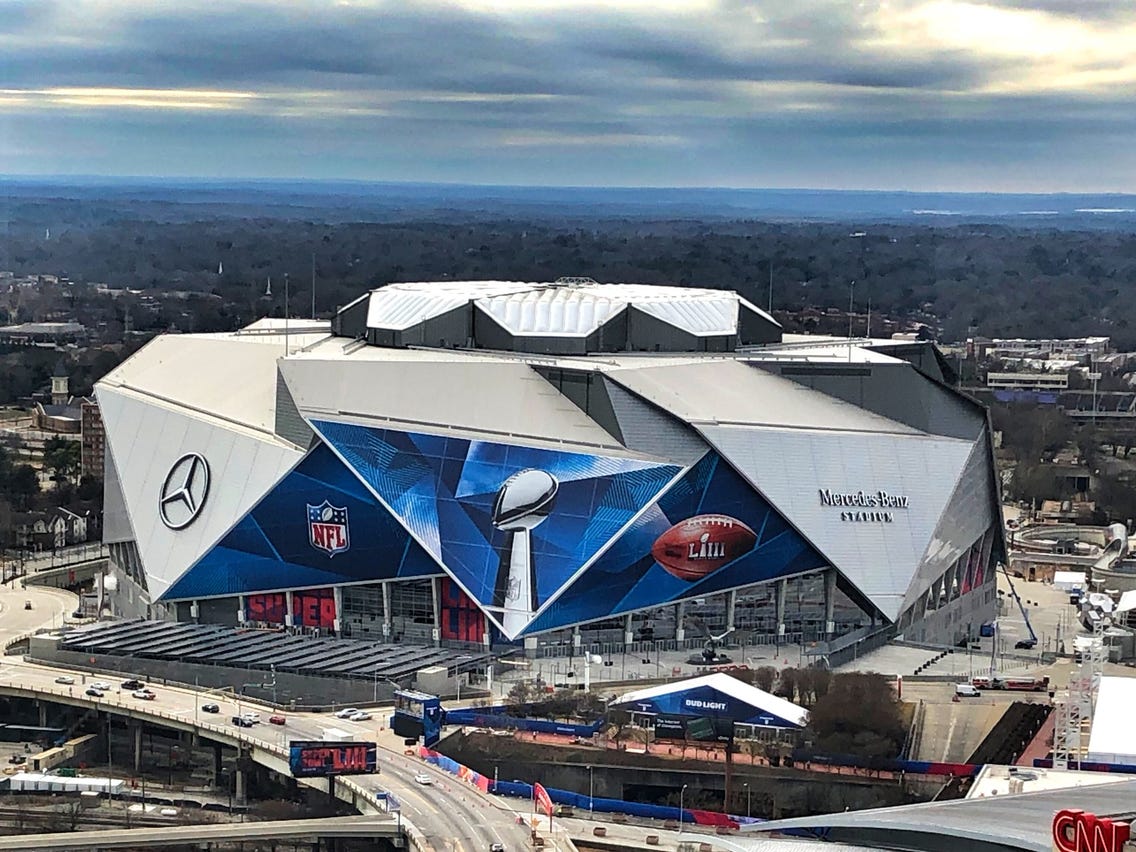 Mercedes-Benz Stadium is a multi-purpose stadium located in Atlanta, Georgia, United States.  It replaced the Georgia Dome and opened in August 2017. Mercedes-Benz Stadium is home to the Major League Soccer team Atlanta United FC and the National Football League team Atlanta Falcons. The stadium’s retractable roof, which has a “pinwheel” made of eight transparent triangular panels, is its distinguishing feature.

It was formally inaugurated in 2017 with an Atlanta Falcons preseason game versus the Arizona Cardinals.

The Mercedes-Benz stadium was opened in 2017 at a cost of $1.5 billion to earn a place as one of the most expensive stadiums in the world in 2022. The stadium is owned by World Congress Center Authority.

Wembley Stadium is owned by the Football Association, is tied with Mercedes-Benz Stadium as the fourth most expensive stadium in the world, having cost the same $1.5 billion to build as the latter. Inaugurated in 2007, the stadium serves as the home of the England National Teams, and has hosted numerous illustrious events, including the Champions League Finals, and the European Championship Finals. It is the largest stadium in the UK and the second-largest stadium in Europe, with 90,000 seats.

The Yankee Stadium is home to the iconic New York Yankees baseball team and the Major League Soccer’s New York City FC. With a total construction cost of $1.5 billion (£1.1 billion), Yankee Stadium is on of the most expensive stadiums in the world in 2022.

The total construction cost is $1.31 billion, making it one of the most costly stadiums in 2022.
The International Champions Cup (ICC) and the Singapore Rugby Sevens are held at the stadium in addition to the home matches of the Singapore football team.
The stadium is the largest in the nation in terms of seating capacity, with a maximum capacity of 55,000 for football and rugby, 52,000 for cricket, and 50,000 for athletics events.

Completing our list of the top 10 most expensive stadiums in the world is Krestovsky Stadium of the FC Zenit Saint Petersburg.  The total construction cost for the stadium is $1.1 billion, rightly earning the stadium a name as of the most costly stadiums in the world. The stadium was opened in 2017 and has hosted major competitions including the 2018 World Cup and Euro 2020.

View all posts by admin →

No comments to show.