The main body of NASA’s Europa clipper probe has recently arrived at the Jet Propulsion Laboratory (JPL), the project team said on Tuesday (7). By 2024, the spacecraft will complete assembling and go through a series of tests before Jupiter’s icy moon is launched to study Europe.

With a height of 3 meters and a width of 1.5 meters, the probe body is constructed by means of an aluminum cylinder that integrates electronic components, radios, pipelines for thermal management, cables and propulsion. The Europa Clipper will be the largest spacecraft ever developed by NASA for a planetary mission. 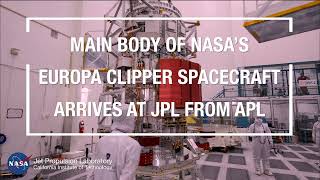 When collapsible equipment is installed and its solar panels are opened, the spacecraft will be shaped like a basketball court (28 meters long). “This is an exciting time and a big milestone for the entire project team,” said Jordan Evans, JPL’s mission manager.

The launch of the Europa Clipper is scheduled for October 2024. According to scientists, Jupiter’s moon Europa, which is home to an underground ocean with twice as much water as all the oceans on Earth, is expected to make Europa 50 flyby. Furthermore, these oceans may have ideal conditions to support life as we know it.

For this, nine scientific instruments will be installed in this spacecraft to collect information about the atmosphere, surface and interior of Europe. With this information, scientists will be able to measure the depth and salinity of the ocean, as well as the thickness of the ice shell and the potential plumes that could be water.

In March of this year, JPL teams embarked on a mission phase known as assembly, test and launch operations. The first instrument was the Europa-UVS ultraviolet spectrograph. This was followed by Thermal Emission Imaging Instrument, e-Themis.

Developed by a team from Arizona State University, the E-THEMIS is a state-of-the-art infrared camera capable of mapping the temperature of Europe. In this way, scientists will be able to collect signals about the Moon’s geological activity, which may include the location of liquid water near the surface.

It is believed that by the end of the year, most flight systems and scientific equipment will be integrated. Tom Magner, project manager at the Applied Physics Laboratory (APL) at Johns Hopkins University, said the development of the flight system involved hundreds of engineers and technicians.

The main design of the probe is, in fact, made up of two stacked aluminum cylinders, in which the cargo of the spacecraft will be damaged: radio frequency modules, radiation monitors, propulsion electronics, energy converters and all wiring.

The radio frequency subsystem will feed eight antennas with a 3-meter wide high-gain antenna. The entire wire on the probe, called the whip, weighs 68 kg and is 640 meters long if stretched. The spacecraft will also receive a “safe” that will protect the electronics from Jupiter’s radiation.

Inside the main compartment will be two tanks: one for fuel and the other for oxidants – in addition to the pipeline that will carry these substances to the 24 engines, where they will be assembled to carry out chemical reactions and to create thrusts for the probes.

When the spacecraft is close to Jupiter, the engine will be used for large maneuvers and also for minor maneuvers such as course and position adjustment during the icy moon flyby. Following its launch, the Europa Clipper will travel six years (2.9 billion km) to Jupiter and begin its study around 2031.