Specializing in the High Performance Computing (HPC) and research markets, Tachyum began offering Prodigy to select customers this week, the company’s newest processor for servers and data centers. The innovation is “the world’s first universal processor”, embedded with some of the most advanced technologies available today, capable of performing CPU, GPU and artificial intelligence functions on a single chip.

With Prodigy, Tachyum is targeting solutions like the recent Nvidia H100 and AMD Instinct MI250X, the biggest difference being the ability to act as a CPU, GPU or TPU (Tensor Processing Unit), dedicated to AI, code-based. Running .. In addition, the company calls the novelty a “universal processor”, which allows data centers to replace complex configurations with multiple CPUs and GPUs for just one chip.

The line has 8 models in different configurations of cores, but the highlight goes to the T16128-AIX, at the top of the line with 128 cores and extreme configuration. Produced on TSMC’s 5nm N5P process, optimized for data center chips, all 128 cores run at 5.7GHz and have access to up to 32TB of DDR5-7200 RAM spread across 16 channels and 64 DIMM-format modules. TB2 reaches bandwidth / s, and 64 PCIe 5.0 bus lanes.

Powerful specifications translate into the use of 950 W, a figure that is effective when we consider it a single processor, but much less than a combination of CPUs and dedicated GPUs. Companies interested can combine 2 or 4 products in a 2U rack (server “drawer” with a thickness of about 90 mm), this set can take it to even higher levels with 512 cores and 3,600 W usage. 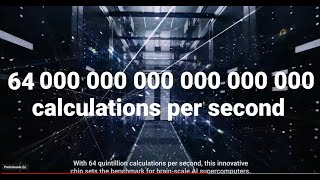 One of the most interesting points in the Tachyum Prodigy family is that, in addition to performing CPU, GPU and TPU functions, they can all run instructions from Tachyum’s native architecture or translate code from x86, ARM and RISC-V architectures, further strengthening the purpose. The “universal” of the elements. However, there is no information on how this will affect translation efficiency.

To achieve this feat, the chip line has 2 1024-bit vector units and 1 4096-bit matrix processor per core, support for computing in FP64, FP32, TF32, BF16, INT8, FP8 and TAI formats, quantitative support processes. Low-precision data format, as well as support for “scatter” and “gator” processing, which will make array loading easier on AI.

Tests and futures with more cores at 3nm

The company released some of the benchmarks that Prodigy introduced in the SPECrate 2017 test, in which the launch would have performed 4 times better than competitors like the H100, Xeon 8380 and AMD EPYC 7763 Milan with Zen 3 cores. High-precision FP64 calculations with AI applications, where the chip should not be 30 times larger.

Practically, the FP64 is guaranteed to deliver 90 TFLOPs of T16128 computing power, but 4 of these chips and a rack with air cooling will achieve 6.2 PFLOPs (PetaFLOPs, or 6,200 TFLOPs) – in comparison, DGX, NVI’00 Server’s new 4 H100P With units, it promises to deliver 960 TFLOPs. Expectations are even higher on the liquid-cooled version of Prodigy, which will deliver 12.9 PFLOP.

Touchum did not disclose the price, as it is a product of the company, but stated in detail that the rack will reach the customer as a valuation unit, so that the necessary customization can be done. Interested companies are required to pre-sell the server within a period of 6 to 9 months – lack of components is the reason for the delay.

Along with the Prodigy announcement, the company also released a roadmap for the next 2 years, in which it plans to launch Prodigy 2 in 2024. Some technical details of the successor have been revealed, but the new generation 3 is expected to bring the product. nm. , Even larger cores, to increase HBM memory bandwidth and newer CXL 3.0 and PCIe 6.0 buses.